Surviving a Gunshot Wound to the Head During the dark days that followed Hurricane Katrina’s landfall on the City of New Orleans, and the chaos that ensued, Officer Kevin Thomas, while on patrol, suffered a gunshot wound to the head while trying to arrest a suspect in Algiers.

He was rushed to West Jefferson Medical Center where Culicchia Neurosurgeon John Steck, MD removed the bullet in extreme conditions, with only emergency power available in the operating room.

Kevin has made a full recovery though he is unable to serve as a police officer. He suffers from occasional seizures but counts his blessings that he is alive and with his family today. The bullet entered Kevin’s skull in the same general location as the one that injured Rep. Gabrielle Giffords in a shooting on January 8, 2011 in Tucson, AZ.

Kevin spoke with WWL TV’s Meg Farris about his recovery and determination. 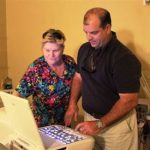