Hearing After 40 Years of Silence

Martha Davis began losing her hearing in her twenties, the result of several bouts of measles as a child. For the last 40 years, Martha has been hearing impaired, unable to hear the sounds that make life so special. She never heard the sound of her children’s voices and relied on lip reading to hold conversations.
That began to change last year, when Martha saw Neurotologist Moises Arriaga, M.D., who recommended a cochlear implant. Martha underwent surgery a little over a year ago to have an implant placed in her left ear. So amazed at hearing the world around her, she underwent a second surgery in December for placement of a new “Hybrid” cochlear implant in her other ear that would allow her to hear out of both ears and with better quality. The Hybrid is both a cochlear implant and a hearing aid.

In the news report below, WWL-TV’s Meg Farris captures the moment when Martha was able to hear out of both ears for the first time, using new technology that amplifies the low-pitched hearing a person has while restoring access to the high-pitched hearing they’ve been missing. 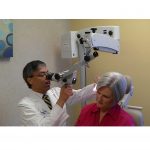 Now Hear This: The Risks of Hearing LossUncategorized 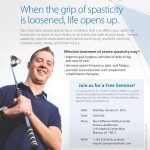