On January 8, 2008, Kelsey Favrot was diagnosed with a malignant brain tumor known as Gliomatosis Cerebri. During the next 20 months, Favrot underwent surgery, radiation and chemotherapy with courage, hope and grace. Unfortunately, she had to receive treatment out of town because none of the hospitals in New Orleans had a physician whose primary focus was neuro-oncology. The distance was a hardship for Favrot, her family and friends, who would have preferred she remain in New Orleans for care so they could be at her side. With characteristic determination, Favrot began to explore ways to assist those who would face a brain cancer diagnosis in the future. Although Favrot succumbed to brain cancer in August 2009, her legacy continues to fulfill her wish to help those dealing with brain cancer.

The Chair was supported by fundraising efforts, including the Kelsey Bradley Favrot Memorial 5k Run/Walk. The annual event will be held this year on Sunday, October 8, 2017, at Audubon Park. Proceeds from this year’s race will support the establishment of a center at LSU Health New Orleans focusing on brain cancer research and treatment. To register or learn more about sponsorship or donation opportunities, please visit https://www.kelseysgoal.com/.

In this video, Dr. Mammoser discusses plans for an upcoming clinic trial on recurrent Anaplastic Astrocytoma in the summer of 2017. 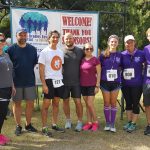