Culicchia Neurological Physicians Frank Culicchia, M.D. and John Steck, M.D. were gracious hosts to delegates at the annual American Association of Neurosurgeons which met in New Orleans in April. The Association asked Drs. Culicchia and Steck for a few recommendations on what visiting doctors could do in NOLA while here during their convention last month. Take a look.

About 5 and a half minutes into the video below about the history of neurosurgery in Louisiana, Dr. Frank Culicchia talks about the growth of LSU’s Neurosurgery Dept. in the aftermath of Hurricane Katrina. Dr. Culicchia is chair of the department here in New Orleans. Watch:

Research conducted by LSU Neurosurgery’s Anthony Digiorgio won an award from the Association. Dr. Digiorgio presented his findings at the conference. 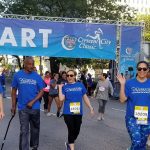 Stroke Survivor Still Training for the Next RaceUncategorized