May is Brain Tumor Awareness Month

According to the National Brain Tumor Society, in 2020, an estimated 1,480 people in Louisiana will be diagnosed with a primary brain or other central nervous system tumor. It is estimated 350 of those will be malignant.

May is Brain Tumor Awareness month in the United States. Here is how you can support brain tumor research and treatment in Louisiana.

The Kelsey Bradley Favrot Brain Tumor Initiative was founded in the memory of a New Orleans wife and mother of four children. Kelsey’s dying wish was that her hometown offer the same level of care as major medical centers so patients don’t need to travel. Now in its fifth year, the initiative has made possible several advances in neuro-oncology care, including the hiring of LSU Health New Orleans Department of Neurosurgery Neuro-oncologist Aaron Mammoser who now sees local patients and conducts clinical trials. The Initiative is currently raising funds to expand pediatric neuro-oncology care for the younger members of our community. The Brain Tumor Initiative’s annual Gray Matters Gala was to be held in May and is currently being rescheduled due to the pandemic. In the meantime, you can donate to the Initiative here. Juvenile Brain Tumor Survivor Kasey Marse knows well how critical it was to to be able to recuperate at home with her family and friends by her side.

Kacey was diagnosed 29 years ago with brain cancer when she was 7 years old. Her saga began with vision problems. That’s when she started seeing Neurosurgeon Frank Culicchia, MD, who successfully removed the tumor in a series of operations.

“Kasey had a juvenile pylocytic astrocytoma, a low-grade tumor that is not as aggressive as other brain cancers, but still a cancer that can kill and disable. Kacey fought two relapses and underwent radiation and chemo. She is now disease-free,” Dr. Culicchia says. Kacey insists the surgeries never scared her. The fact that she was able to undergo treatment at West Jefferson Medical Center with her family and friends by her side made all the difference. She was first diagnosed 29 years ago. She is celebrating 20 years cancer-free. 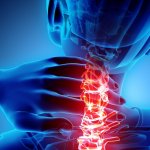 Tips For A Healthy SpineUncategorized

Back in Action – Spinal Stenosis TreatmentUncategorized